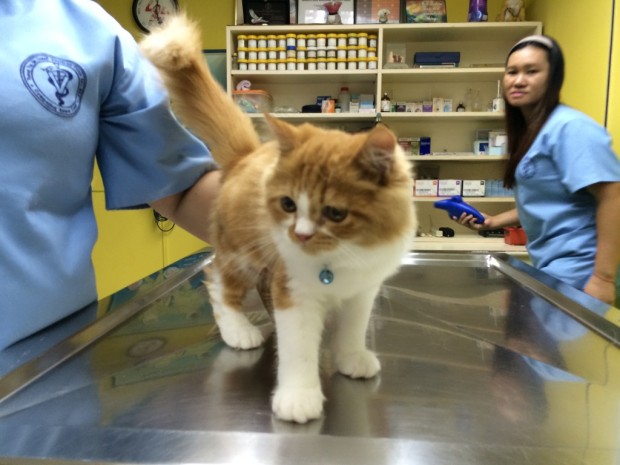 Louie was due for this first vaccine jab in May. So I brought him to the vet on 16th May for this vaccination and de-worming. Last weekend was his second vaccine jab. He handled the jab like nothing happened. Ate his de-worming pill and we decided to get him micro-chipped.

So it is all done for the year. He is a growing furball – very active and FAST!  and ….. starting to be cheeky at times.

On a Saturday morning, at 6am, we found a stray cat next to our mini swimming pool. By the look of it, he wanted to drink the water from the pool. So one of my sisters ran back in the kitchen to get a proper bowl and fresh drinking water for the poor cat. However, we noticed that he was struggling to drink – as if something was poking his mouth. It revealed that his jaw was somewhat dislocated! Poor little cat… God knows how long he has been like this and how many days he’d been without food and water.  My sister quickly brought out the cat carrier and without any hesitation, the cat voluntarily walked towards the carrier and went in it. It was like as though he was trying to say – “Help Me!”

Coincidently, I was planning to bring Louie for his follow up jab. So I brought both cats (Louie and the stray cat) to the vet. It felt like a loooooooooooooooooooooooooong 20 minutes journey to the vet. The stray cat smelled badly – maybe due to his injuries to the point that I had to wind down the windows while driving.

So the vet had a look at the cat. His view was the stray cat’s jaws were literally broken into 3 parts – of which the left jaw bone was poking the right cheek. The vet advised us to leave the cat with them so that he can have a closer look and update me once he’s done. So, we head back home with Louie only.

Come evening, I received a call from Ann (the vet nurse) and she said the stray cat had been in a very very bad shape. Not only his jaw was already broken, he was highly dehydrated because of his inability to eat / drink and they discovered that his testicles were full of maggots! Meaning, his internal organs were in a bad shape already.

The Dr. Vet gave me two options:
1. I would take him back and let nature do its job; or
2. To put the poor cat to his deep sleep.

I gave some thought and it would be a pity if I were take him home – there’s nothing that I can do to help him. He was in deep pain and I don’t want him to suffer any more, so I opt for option 2. It’s not that I wanted to take the easy way out , it’s just that I don’t want it to prolong any longer.

In my religion, some people would take that as killing the animal, but when I consulted a few people, they said that my actions were not wrong – it all depends on the niat (intentions).

I felt extremely sad for the stray cat but he is now in a better place.

The days I write